Same sex couples to be recognised as parents of children

By admin
Posted June 28, 2018
In Fertility
Same sex couples to be recognised as parents of children2018-06-282019-01-08https://www.patrickforeilly.com/wp-content/uploads/patrick_f_o_reilly-1_dark.pngPatrick F O'Reilly & Co. Solicitorshttps://www.patrickforeilly.com/wp-content/uploads/same_sex_couples_surrogacy_small.jpg200px200px
0

The Minister for Health has today received approval from Cabinet to draft a standalone piece of legislation, which will close a loophole and allow the Minister to commence two key parts of the Children and Family Relationships Act.

Commencement of the two parts will allow same-sex couples to seek a retrospective declaration of parentage.

Minister Simon Harris said “The commencement of Parts 2 and 3 of the Children and Family Relationships Act 2015 will allow same-sex couples to seek a retrospective declaration of parentage. This will be a very welcome step for lots of families. I hope to be in a position to introduce this legislation into the Dáil before the summer and commence in the autumn.”

Minister Katherine Zappone said “All families are equal and must be treated as such. The Cabinet decision is an important step to address an anomaly in law, which has caused very serious concern for families. Politicians from all sides must work together to end this discrimination as soon as possible.” 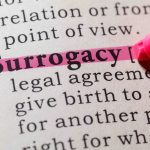